ALL CARDS ON THE TABLE ABOUT AIR QUALITY 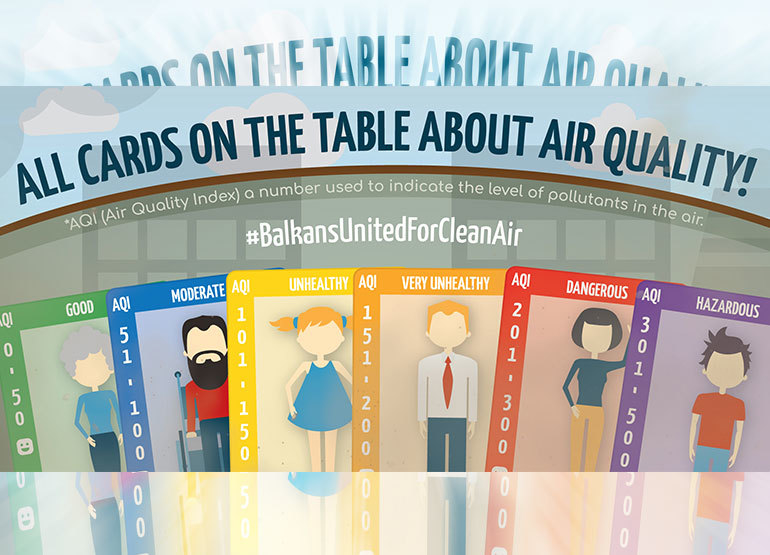 Whether we are breathing increasingly polluted air or merely becoming more aware of this thanks to popular apps and activist campaigns, public pressure remains a crucial tool for the improvement of the monitoring system and fulfillment of the right to being adequately informed about the pollution levels.

We, the representatives of the "Balkans United for Clean Air" campaign, point out the fact that states and local self-governments are obligated to enable access to information on air pollution at any time. We would like to remind them, as well as the media, that this matter is equally as important as reporting on natural disasters. The data needs to be timely and easily accessible, and its presentation to the citizens must be understandable.

Western Balkans citizens have the right to know the current level of air pollution and to be informed on all further developments. Local and state institutions need to provide them with timely information, as they do in cases when the water quality in public supply systems declines or when there is an increase in solar ultraviolet radiation.

Despite significant advancements that occurred since the initial establishment of air quality monitoring stations, they still have an insufficient territorial coverage. Even in urban surroundings, there lacks information on certain pollutants, especially the finest dust particles (PM 2.5), which is one of the most hazardous substances. Many stations publish their data belatedly, although they would be relevant for the population only if accessible on an hourly basis.

Most of the region's countries do not have a precise registry of sources and levels of harmful matter emissions. This, coupled with the lack of serious investments in monitoring stations, prevents the adoption of adequate air quality improvement measures.

By signing the Sofia Declaration in November 2020, Albania, Bosnia and Herzegovina, Montenegro, Kosovo, North Macedonia and Serbia have agreed to endorse the Green Agenda for the Western Balkans, which includes the WB6 states' obligation to improve monitoring and reporting efforts, while also opening a path towards EU funds.

The “United Balkans for Clean Air” campaign was initiated by the European Fund for the Balkans, in partnership with the Right to the City (Belgrade, Serbia), Renewables and Environmental Regulatory Institute (Belgrade, Serbia), Belgrade Open School (Belgrade, Serbia), Environmental and Territorial Management Institute (Tirana, Albania), Ekoforum (Zenica, Bosnia and Herzegovina), Centre for Ecology and Energy (Tuzla, Bosnia and Herzegovina), Sbunker (Pristina, Kosovo), Air Care (Skopje, North Macedonia) and OZON (Podgorica, Montenegro).Together, we will make available all of the campaign’s materials to Western Balkans citizens, whom we expect to take active part in the campaign.

Let us always be aware of what it is that we’re breathing – join us in the solidarity-driven struggle of Western Balkans citizens and become a part of the "Balkans United for Clean Air" campaign.

READ THE EXPERT’S BRIEF ON THIS TOPIC…

As recently as ten years ago, air pollution data was dealt with only by scientists and public health institutions. The rest of us were only guessing whether we are looking at ordinary fog or a cloud of smog and fine dust. The only people who complained about it were chronic lung disease patients and inhabitants of major industrial and mining centers. The latter could indeed often see and smell the pollution and notice the layers of soot on vehicles and garden plants.

The construction of pollution monitoring stations ensued in the meantime; however, data did not become publically available and understandable right away. Today, certain TV programs include an air quality index display, albeit only in the case of capitals and major cities. This rarely applies to public spaces.

The most sophisticated measuring stations in the Western Balkans are managed by the respective ministries of environement and other institutions under their auspices. In a simplified form, the overall pollution level is categorized by colors – there are five or six of them, depending on the methodology.

The category containing the overall indicator is determined by the most dominant pollutant. For instance, if the concentration of sulfur dioxide is a level purple health hazard, the aggregated indicator will reach the purple category even when all other substances are in the green.

The government and local self-governments are legally obligated to monitor air pollution, inform the citizens on the results and create plans and implement improvement measures when the permitted ceilings are exceeded. Despite significant advancements that took place since the establishment of the air quality monitoring stations and the systems which keep the public informed in the region's states, the quality and amount of data have not reached satisfactory levels, and the official results need to be much more available and clear.

If it weren't for the popular websites and mobile applications that provide real-time data from the majority of stations in the world, the inhabitants of many cities would have to rely on local institution websites' information. Those are still often belated and the data is not presented in an easily understandable manner.

Furthermore, many areas including urban ones, are yet to be covered by monitoring stations or still lack measurements of all the relevant pollutants. The inhabitants of sparsely populated areas and people without access to the internet are mostly kept in the dark. If they received information on outdoor, i.e. ambient air pollution reaching dangerous levels, they could limit their outdoor activities and keep their windows closed until the situation improves, as is recommended in such situations.

Citizens have the right to be informed about the air pollution levels and be notified on any change that occurs. Local and state institutions must inform the citizens in a timely manner, similarly to when the water quality drops in the supply system, or when the concentration of allergens in the air or the solar ultraviolet radiation increase.

We can draw another comparison, namely to warnings about extreme weather or power outages. Weather conditions also affect the concentrations of air pollutants, yet the competent institutions in the Western Balkans still fail to publish air quality forecasts.

According to findings by the European Commission[1], we have least available data about the levels of particulate matter in the PM 2.5 category (diameters of 2.5 micrometers and smaller), given that many stations are either not measuring them at all or do so with interruptions. This is one of the most dangerous pollutants – finest, invisible dust penetrating the body, even through the skin.

There lacks chemical analyses which would determine the source and levels of airborne secondary particles. Namely, monitoring stations cannot determine the origin of the particulate matter, and some types of PM do not reach the atmosphere directly from combustion, but are the result of other pollutants' chemical reactions.

Institutions in charge of monitoring lack sufficient financial and human resources, as is stated in the World Bank's reports on North Macedonia[2], Bosnia and Herzegovina[3] and Kosovo[4], respectively.

Data validity, both in national reports and in those submitted to the European Environment Agency (EEA) varies in different locations and countries. Hourly measurement results are the main criteria. European standards require an annual 90% data availability; however, the registry also contains data from measuring stations that achieve only up to 75%.

The European Commission states that the number of stations delivering data to the Agency is limited. Most of them are located in North Macedonia.

Data quality requires regular maintenance of state network devices, which is expensive. The biggest funds are needed for the automatic measurement of PM levels, and slow procurement procedures have been causing month-long delays[5][6].

The majority of the region's countries do not have a precise registry of the sources and levels of pollutant emissions[7].

Making decisions on measures to improve air quality requires detailed monitoring of the situation, along with official reports containing aggregate data. If there is no constant measuring, health care institutions are unable to monitor and study the effects of air pollution.

The bulk of responsibility for the pollution monitoring and public information systems lies with the governments of the region's states. In order to overcome these challenges, there need to be major investments, but many of the problems can be resolved merely by displaying political will – the central authorities have the power and capacities to improve cooperation and coordination with lower administrative levels and enable exchange of information. They are also in charge of improving the monitoring stations' maintenance process and including more of them in the European system.

Whether it is a matter of pollution increasing in some areas or us having merely become more aware of it due to more data being available, it implies another important factor when it comes to political will. Namely, pressure from the public. It is obvious that citizens and environmental protection organizations must demand the fulfillment of the right to information on the air we breathe.

The power of association

The pressure exerted on institutions has already been amplified by the popularity of air pollution monitoring websites and mobile applications that provide aggregate data and simple access to information about cities and states from the entire region. Their continued development, along with enabled access to historical data and its comparative analysis, would further mobilize the population and raise awareness with regard to this burning issue.

Lately, citizens have been linking the data from the applications with those gathered by their household air pollution measuring devices. These are not as precise as official stations – however, linked with meteorological data, they could be a helpful asset for pollution forecasting. Transferring information from personal devices to applications is also useful for people in areas that still lack official monitoring units.

One of the main tasks is the creation of a catalog/inventory of sources, types and amounts of pollutants, in order to register the share of individual human activities in causing air pollution. Local self-governments play a vital role in this matter. Namely, this information will be complete only if it includes household heating devices and the type of fuel that they use. Speaking of municipalities and cities, they can also contribute by placing digital displays of information on air pollution in public places.

By signing the Sofia Declaration in November 2020, Albania, Bosnia and Herzegovina, Montenegro, Kosovo, North Macedonia and Serbia have agreed to endorse the Green Agenda for the Western Balkans, which defines the WB6 states' obligations in improving monitoring and reporting efforts, and opens a path towards EU funds.

Finally, being well-informed on this matter is possible only with the involvement of the media – public and private broadcasters, local outlets as well as those with national and regional coverage. When it comes to portals, radio and TV stations, it shouldn't be that tall of a task to include an animated figure whose change in colour will indicate the current quality of the air we are brea

[6] Godišnji izvještaj o kvalitetu zraka u Federaciji Bosne i Hercegovine za 2019. godinu (2020) (Annual Report on Air Quality in the Federation of Bosnia and Herzegovina in 2019) http://www.fhmzbih.gov.ba/latinica/ZRAK/izvjestaji.php