EFB Fellowship at the Austrian Parliament

In order to support the countries of the Western Balkans on their way to the European Union, the Austrian Parliament, along with the European Fund for the Balkans (EFB) and with generous support of the ERSTE Foundation, launched the fellowship program for civil servants from the WB6 parliaments in March 2019.

The EFB Fellowship at the Austrian Parliament is a practice-oriented educational programme for civil servants working at the national parliaments of Western Balkan countries. The purpose of the programme is to give impetus to the EU integration-driven reforms of the Western Balkan parliaments’ administrations, by means of building the capacities of individual agents of change.

The programme targets public administration professionals who stand out with their strong commitment to the development of their societies and are prepared to acquire new skills and broaden their horizons through an exchange of know-how with their Austrian counterparts.

It enables for public officials working for WB6 parliaments in Albania, Bosnia-Herzegovina, Kosovo, Montenegro, North Macedonia and Serbia to become familiar with Austria's parliamentary work during a six-week period working with the National Council and its legal, legislative and scientific departments, as well as the IT, communications and the international affairs divisions.

The first seven fellows from Albania, Bosnia and Herzegovina, Montenegro, North Macedonia, Kosovo and Serbia have successfully completed their fellowships at the Austrian Parliament in 3 groups, between September 2019 and March 2020. 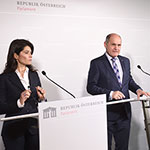 Press Conference and signing of the MoU between the Austrian Parliament and the European Fund for the Balkans, March 28th, 2019 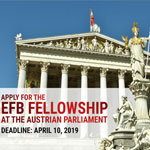 Apply for the EFB Fellowship at the Austrian Parliament 2019-2020