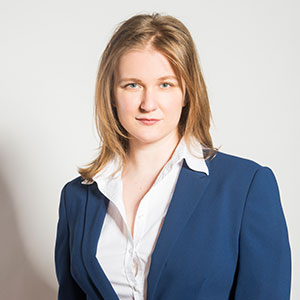 Aleksandra Tomanić has been the Executive Director of the European Fund for the Balkans since 2019. Prior to her appointment to this position, she was a senior adviser with the German development agency GIZ, in charge of the German-Serbian Initiative for Sustainable Growth and Employment.

Previously, she has worked as coordinator for regional initiatives and EU policies with the Serbian Government’s Social Inclusion and Poverty Reduction Unit – which was the reason of her relocation to Belgrade in 2013. Her formal professional career began in Brussels, at the European Commission, DG Enlargement, where she spent almost 4 years with the Enlargement Strategy and Policy Unit, covering various horizontal policies, civil society and media issues in particular.

Aleksandra was engaged in various forms of grass-root activism (from humanitarian to political) during more than 10 years.

She holds a Master’s degree in European Studies of the Freie, Technische and Humboldt University of Berlin. She holds a degree in economics and management after studying at the Ruhr-Universität Bochum and Complutense University Madrid.

She is a native speaker of German and Serbo-Croatian, fluent in English and Spanish and a basic user of French.