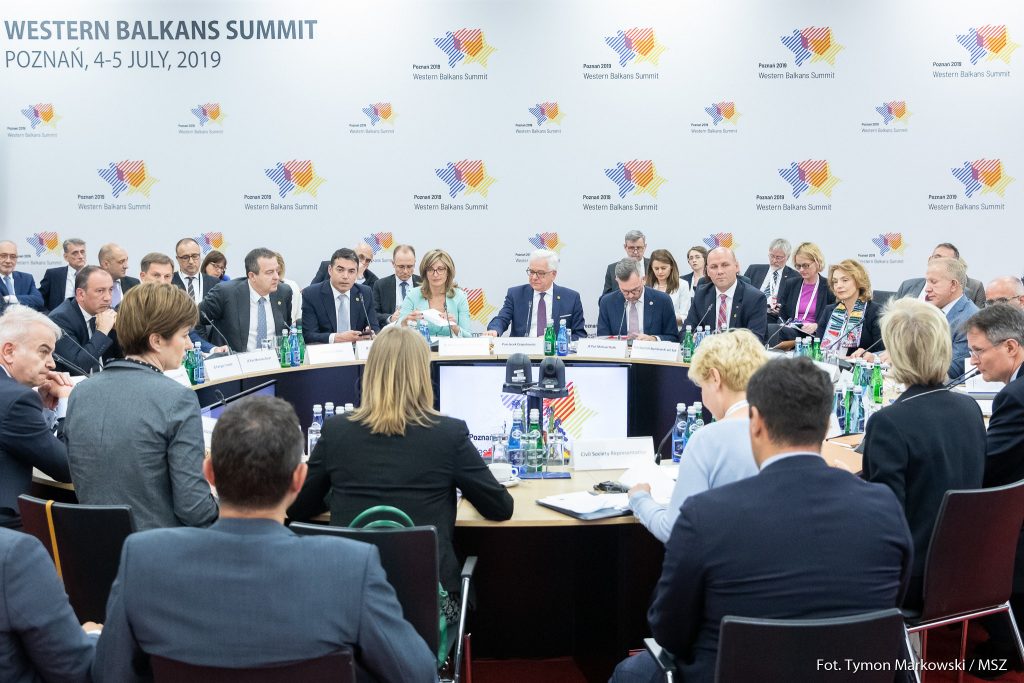 Representatives of the European Fund for the Balkans’ (EFB) and its Balkans in Europe Policy Advisory Group (BiEPAG) took part in the meetings and panels within the Western Balkans Summit in Poznan (3 – 4 July). They participated in discussions with the foreign ministers of the Berlin Process in order to present their views on the main challenges the region is facing.

For the first time during the Berlin Process, civil society representatives were invited by the Polish MFA, Jacek Czaputowicz, not only to provide input, but to stay during the entire foreign ministers’ meeting. The Executive Director of the EFB, Aleksandra Tomanic, and six representatives of the Western Balkan civil society organisations (CSO) – Jovana Marovic (Politikon Network), Vukosava Crnjanski (CRTA), Adnan Huskic (Center for Election Studies), Gjergji Vurmo (Institute for Democracy and Mediation), Naim Rashiti (Balkans Policy Research Group) and Marko Trosanovski (Institute for Democracy Societas Civilis) discussed regional trends. The state of democracy in the Western Balkans, rule of law, bilateral issues, EU enlargement, media freedom and the future of the Berlin Process were some of the issues raised by the CSO actors. During the foreign ministers meeting, the idea that the prime ministers meeting of the Berlin Process would be a more appropriate place for civil society representatives to discuss these topics has been raised by some ministers.

“Looking at results achieved so far, and looking at the long way ahead – you will not manage by yourself. You will need help. Let us help you.”

Aleksandra Tomanic, the EFB Executive Director at the ministerial meeting

The Think Tank Forum tackled the issues such as regional cooperation, social-economic issues, the rule of law and the EU enlargement policy. On this occasion, the authors of the CSF Policy Briefs, Jovana Marovic (Politikon Network), Gersi Gashi (Democracy for Development), Maja Bobic and Vladimir Medjak (European Movement in Serbia) have elaborated their findings on the respective subjects of the briefs. An expertise on the topics was also provided by the BiEPAG members: Donika Emini (Kosovar Centre for Security Studies), Zoran Nechev, (Institute for Democracy “Societas Civilis”) and Srdjan Majstorovic (European Policy Centre – CEP).

On July 4, a number of experts, activists, the EU and regional decision makers gathered to discuss the future and the current situation of the Western Balkans within the Civil Society Forum of the Poznan Summit. Milena Stefanovic (EFB) and Simonida Kacarska (European Policy Institute) presented the CSF Policy Briefs on cultural cooperation and on civil society and youth engagement in the Western Balkans. Ana Marjanovic Rudan (EFB) moderated the final session that was devoted to drawing conclusions and discussing future engagements of civil society in the Berlin Process. The EFB’s executive director Aleksandra Tomanic briefed participants about the meeting of foreign ministers and presented options how CSF WB could look like in future.

The Civil Society Forum of the Western Balkans (CSF WB) is a platform that brings together think-tanks and policy-oriented civil society organizations from the Western Balkans region. Its purpose is to contribute to regionally-relevant political processes by communicating the latest expertise and field findings to decision-makers, and by engaging in public advocacy campaigns. The CSF WB is coordinated by the European Fund for the Balkans.