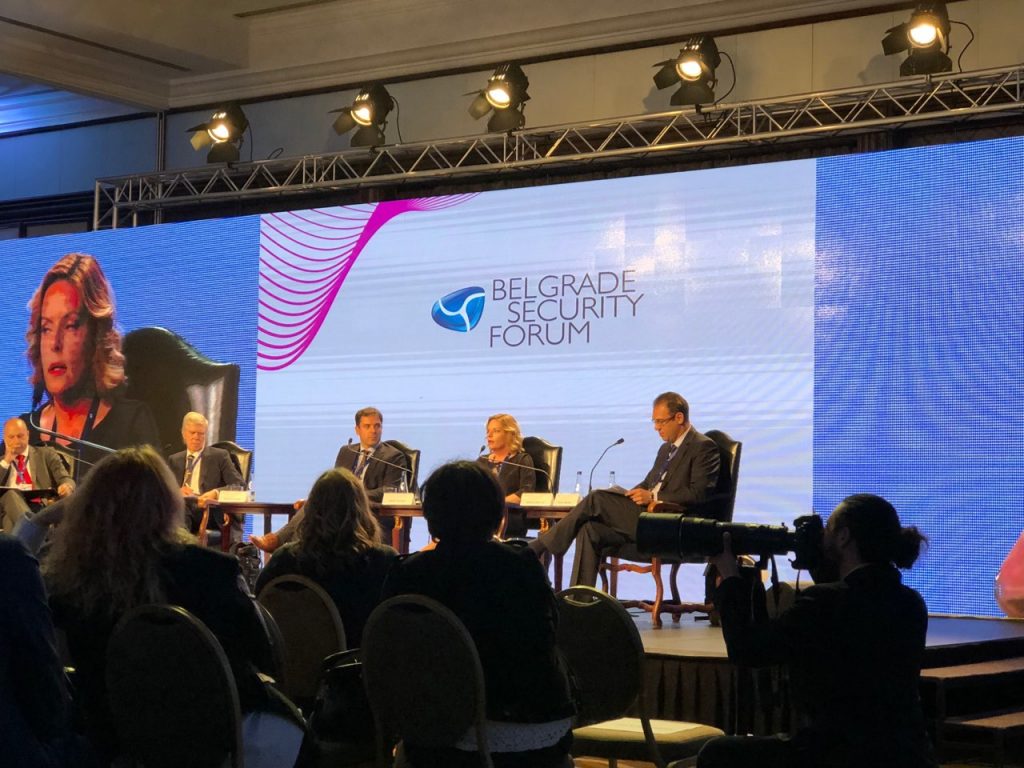 The European Fund for the Balkans and the Balkans in Europe Policy Advisory Group(BiEPAG) were once more part of the agenda of the Belgrade Security Forum: Finding Answers Together to the New Normal, which took place from October 17-19 2018 in Hotel Hyatt Regency, Belgrade.

The Director Hedvig Morvai participated in the opening Plenary Panel 1 “Balkans 2025” (Oct.17, 17.30-19.00) together with Vladimir Medjak, Naim Rashiti and Sir Robert Francis Cooper. The session was moderated by Zoran Nechev.

All the speakers at the first Belgrade Security Forum (BSF) plenary panel stated that both the Western Balkans and the EU have to change their approach towards the accession process, and that dates, such as the proverbial 2025 should not be focused as much as attainment of rule of law and other European heritage.

Ms. Morvai stressed out that the region and the EU need to demonstrate, in all capacities, that there is a clear European perspective and how the region can deliver on the process. 2025 as a date was never serious or possible, because the region is not delivering.

“The technical process is not showing real progress in the region. The real question is into what kind of  EU will we integrate, because the Union we will join will be vastly different from its current form”, Morvai stated.

“Regional cooperation is a tool – it is not the goal itself. It is not an objective put in front of us in order to make our life even more difficult. We need to redefine regional operation and to start building regional identity”, she added.

She assessed that, at the beginning of the year, there were some positive steps in the region, and on the EU side, but that we are now again back on square one.

The Balkans in Europe Policy Advisory Group was also part of the agenda of the Belgrade Security Forum with the Plenary Panel 2: “Reinventing the Union” which was scheduled for October 18 from 10.45 to 12.15.

BiEPAG Coordinator and Director of the Centre for Southeast European Studies at the University of Graz Florian Bieber was joined by Emanuela Claudia del Re (Vice-Minister of Foreign Affairs and International Cooperation of Italy), David Konecky (Career Diplomat at the Ministry of Foreign Affairs of the Czech Republic), Guillaume Kossa (Présidant emeritus of EuropaNova), Naddia Koval (Head of the Centre for International Studies at the Diplomatic Academy of Ukraine). BiEPAG Member and Chairman of the Governing Board of the European Policy Centre – CEP Srdjan Majstorovic moderated the panel.

The main discussion points of this panel were centred around finding the answers to the following questions: Re)Nationalization, Europe of Regions, or United States of Europe – what is the (best) future for Europe?, From Eurozone to Migration and European Security Council: Which area should be on the top of EU reform priority list?, Recipe for a global power: Is it time to end the unanimity vote in EU’s foreign policy?, What should be the priorities for the new EU Budget? What needs to happen for a U-turn on Brexit? What are the key trends and actors that are influencing the new design of the EU?

“The EU is there to stay, but we should be courageous enough to accept the process of change, new challenges and reinvention – said  Emanuela Claudia Del Re, Italian Vice-Minister of Foreign Affairs and International Cooperation.

The need of common values, joint civic education and a minimum of public space in order to project a positive perspective for the separate countries and EU as a whole was pointed out by Guillaume Klossa, Prsident emeritus of EuropaNova, a Paris-based European Think-tank and Chairman of Civico Europa.

Florian Bieber, Professor of Southeast European History and Politics and Director of the Centre for Southeast European Studies at the University of Graz and BiEPAG Coordinator presented his view and belief that the EU has always been developing on the basis of organic change, no big bang reforms, but gradual evolution.

He beliefs that there is a need more people who are elected and supported across EU. EU is a union of laws, which are not drawn by the dictators, but by the people. On the other side, the enlargement process can’t guarantee that the countries won’t slide back on the rule of law and democracy. No system can be strict enough to project the future of a country in 10 years.

View the panel “Balkans 2025” at the following you tube link

More info about the panel: http://www.belgradeforum.org/session/plenary-panel-2-reinventing-the-union/

More info about the panel at: http://www.belgradeforum.org/…/plenary-panel-2-reinventing…/