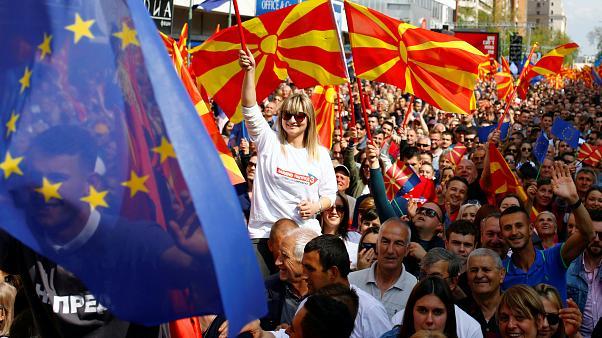 This text has been prepared by Ivan Stefanovski within the project “Rule of Law Reform in the Western Balkans: Reinventing the Rules of the Game” implemented by Politkon Network, in cooperation with CRTA and Tim Institute, and with the support of the European Fund for the Balkans (EFB).

Together with the tempting smell of the first freshly cooked Ajvar, accompanied by the French “Non” for North Macedonia’s accession negotiations, came the announcement for the early parliamentary elections for April 2020. Whether it is rapid emotional reaction on behalf of PM Zaev, or a carefully planned strategic gambit, the country will have to administer its fifth early general elections in eleven years. One would agree that this is too much even for consolidated democracies, let alone a developing country which is still in the process of “de-capture” following eleven years of authoritarian Gruevism. Even more important, ongoing reforms will be put on hold for at least six months. Not the best case scenario for an EU aspiring country.

The usual questions asked before every election, is to which is extent is the country prepared, both legally and politically for its future challenges. Starting with the legal aspect, the greatest challenges in regards to the Electoral Code (EC) are the financing of political and electoral campaigns, the competencies and resources of the relatively newly established State Commission for Prevention of Corruption (SCPC), the conduct of the main political parties in terms of campaign financing, the competences and resources of the State Audit Office (SAO), as well as unification of reporting requirements. Let us approach these issues one by one.

The EC should explicitly define all possible sources for financing of political and electoral campaigns. Furthermore, these rules should apply equally for everyone, and all actors should have equal treatment from the state institutions. In the past, this shortcoming has been underpinned as one of the greatest “gray zones” in the EC, frequently misused by political parties. All source of financing should be stipulated individually, with the law forbidding any other possible way of campaign financing.

The State Commission for Prevention of Corruption should be equipped with an auxiliary body during elections. In that manner, SCPS employees can follow larger campaign events in the field, and report to the office whether abuses and misrepresentation of spent funds is done by the electoral competitors. The election of the new composition of the SCPC was one of the rare shiny examples of how and independent body should be composed. The potential candidates went through public hearings (“grilling”) streamed online and on the Parliament’s TV channel. Civil society representatives had their own members in the evaluation panel. This resulted with an open and transparent process giving the opportunity to experienced and professional individuals to fight the battle against corruption. Still, during the last presidential elections it became evident that the central body, without an auxiliary body which will act as “eyes and ears” in the field, is unable to effectively control the reported numbers by the electoral participants. The creation of this body, similar to the one which is on disposal at the State Election Commission (SEC), could play a crucial role in securing transparency and accountability of campaign financing.

The legal position and competences of the State Audit Office are probably the most vague and problematic in the entire EC in terms of controlling campaign financing. The competences of the SAO in terms of campaign finance oversight need to be further clarified. Current legislation limits the mandate and the resources of this institution. SAO’s resources need to be vastly increased during elections. Consideration could be given to granting the SAO ex officio powers to undertake full campaign finance audits, including requesting further documentation and information from contestants, to ensure a comprehensive review against any possible infringement. The SAO should be mandated to conduct a review of interim reports, and to publish its findings and refer possible violations to appropriate authorities prior to Election Day. The deadline for filing final reports should be within 30 days after the election. The law should establish the scope of audits to ensure comprehensive review against any possible infringement, and SAO granted the necessary investigatory powers. Established penalties for all violations should be imposed. The SAO is the primary supervisory body, but its oversight is limited to auditing the information submitted by electoral contestants and it does not have the capacity to investigate whether that information is accurate or complete. There is no uniform reporting of candidate expenditure, no explicit regulation of third-party campaigning and no requirement for reporting expenses incurred by political parties supporting candidates. Altogether, this diminished the transparency of campaign finance and the effectiveness of oversight.

To summarize, all competent campaign finance regulatory bodies should effectuate their competencies in order to sanction election participants which had failed to comply with the rules concerning campaign finance. Impunity is the main pillar on which lack of transparency and accountability in elections is based. These changes should take effect immediately. The Electoral Code should require interim campaign finance reports be submitted electronically and establish suitable penalties for late or non-submission. The template should include a breakdown of expenses by municipality and require reporting of incurred expenses. In addition, the law should require the publishing of interim and final reports on the day of submission. Lastly, candidates and the relevant institutions have different understandings of the reporting requirements for campaign finance. The lack of clarity and enforcement of reporting rules detracts from the transparency and oversight of campaign finance.

These are the main legal/technical shortcomings which the EC is currently facing. Still, the biggest recurring problem is the current draft legislation in parliament which paves the way for creating one electoral unit for the general elections, instead the current six. Although this is a great step forward towards strengthening democracy and giving greater opportunities to smaller political parties, it is fully in collision with OSCE/ODIHR’s good practices not to amend electoral legislation at least one year prior to the general elections. Furthermore, these fundamental changes to the electoral system need to be conduct thoroughly, in consultation with various stakeholders and international experts, and due time and resources need to be spent.

In terms of the political implications from the early elections, it is difficult to project a scenario which is favorable to the current establishment in power. In regards to the country’s European integration, the early elections would definitely result with a halt of the reforms for at least six months. On the other hand, cross-referencing the results from the presidential elections, and the drop in popularity of the ruling coalition, no one could guarantee a new four-year term for the current government. To sum up, the forthcoming early parliamentary elections do no one good, the least to the Europeanization process of North Macedonia.

Read the full analysis on “Transparency and Accountability of Institutions Responsible for the Oversight of Campaign Financing in North Macedonia”.

About the author: Ivan Stefanovski holds a bachelor degree in Law and a LL.M. degree in Constitutional Law, both from the Ss. Cyril and Methodius University in Skopje, Republic of Macedonia. He holds a PhD in Political Science and Sociology at the Scuola Normale Superiore in Florence on the influence of social movements over policy outcomes in South East Europe. He has research experience related to Social Movements, Democratization, Polarization, Constitutional Law, as well as Media and Politics. He has published in peer-reviewed journals and contributed to edited volumes as well. Ivan collaborates with international scholars and fellow academics from Europe and beyond, participating in interdisciplinary and multi-national research projects.